Via The Ellen Show
Repost
Recaption
The Daily What
Favorite

Naked Kardashian of the Day: Kim Takes It All Off (Again) to Prove She's Really, Truly Pregnant 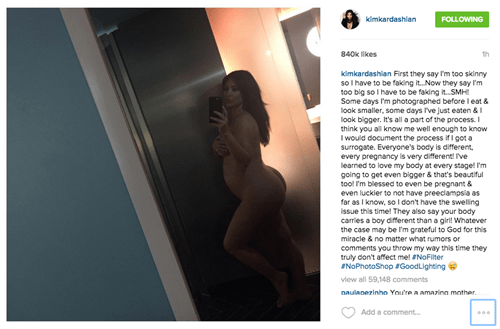 In case you thought Kim Kardashian and Kanye West's second child together was all some enormous Illuminati ruse, now some naked proof exists to the contrary.

In her own words:

First they say I'm too skinny so I have to be faking it...Now they say I'm too big so I have to be faking it...SMH! Some days I'm photographed before I eat & look smaller, some days I've just eaten & I look bigger. It's all a part of the process. I think you all know me well enough to know I would document the process if I got a surrogate. Everyone's body is different, every pregnancy is very different! I've learned to love my body at every stage! I'm going to get even bigger & that's beautiful too! I'm blessed to even be pregnant & even luckier to not have preeclampsia as far as I know, so I don't have the swelling issue this time! They also say your body carries a boy different than a girl! Whatever the case may be I'm grateful to God for this miracle & no matter what rumors or comments you throw my way this time they truly don't affect me! #NoFilter #NoPhotoShop #GoodLighting 😜

There's no telling whether this violates the same way-too-strict nudity guidelines that have led to the deletion of many photos and a lot of naked protests.

But hey, it happened, and we have a screen shot. Caitlyn Jenner put her brave on and wore a women's bathing suit in public for the first time on her show I am Cait this weekend. Since Jenner has started her transition, wearing a swim suit has been something she has expressed concern about.

But as you can see, she faced this challenge along with many others on her new reality show.

In other Jenner/Kardashian news, Kris Jenner was seen with Caitlyn in public for this first time since their split. They appeared to be both getting along in a photo posted on Kim Kardashian's Instagram.

We Know Who Kim Kardashian is Supporting in 2016 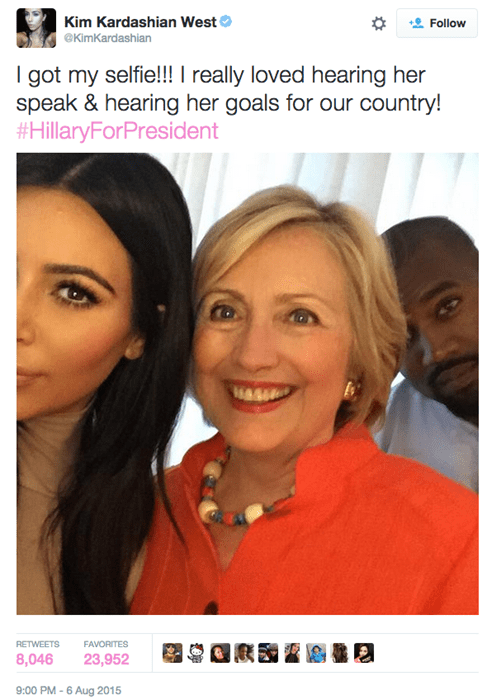 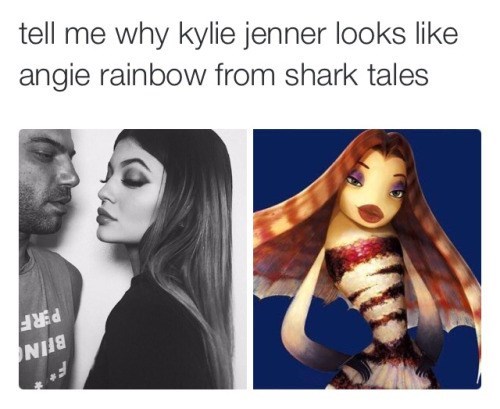 Kylie Jenner's Homegirl Needs Some Ice For That Burn 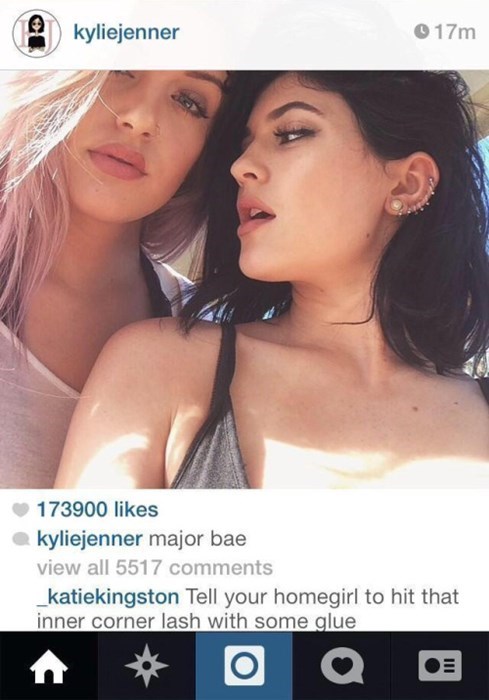 Via The Tonight Show with Jimmy Fallon
Repost
Recaption

These are just a few of the enlightening questions that we learn when Jimmy Fallon got a hold of a conversation taped between Shaquille O'Neal and Kim Kardashian.


The subject? The baby currently developing within Kim's famous womb. 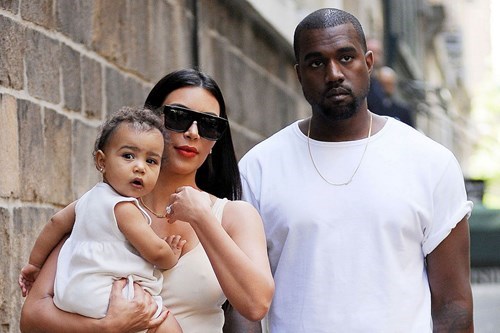 To celebrate Kim Kardashian's May 31 pregnancy announcement, here's the soon-to-be sibling embodying some of her dad's greatest hits. 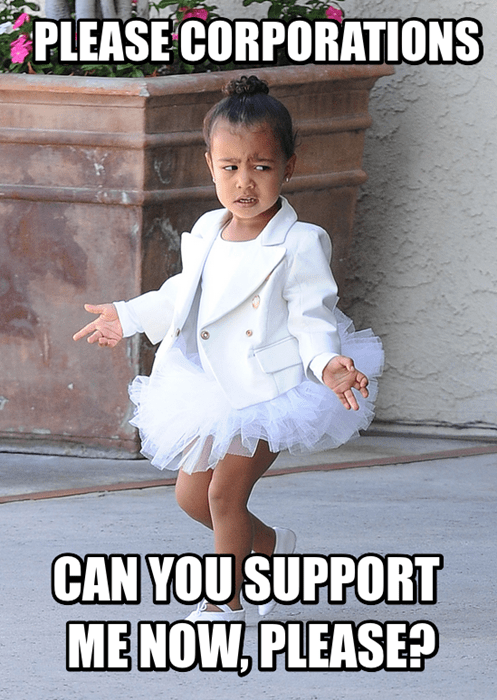 What an unbelievable 'get' for Mrs. West. With Richter behind the helm of this timeless drama, finally the world can understand the poignancy and relevance imbued in such a noble piece of art work.

Kanye Spent a Lot of Money for Kim's Mother's Day

On top "a couple thousand roses" that Kim Kardashian showed off on on her Instagram feed, Kanye West also paid to have that quartet serenade the mother while she was in Brazil.

It certainly was a sweet gesture, but wouldn't it get old for every waiter to say that every single time you received something at a restaurant?

"This water is from Mr. West for the best mother in the world."

"Any chance we could get a refill on breadsticks?"

"These breadsticks are from Mr. West for the best mother in the world."

"What was that? I couldn't hear you over this string quartet that's uncomfortable close to my table."

"I SAID THESE BREADSTICKS ARE FROM MR. WEST FOR THE BEST MOTHER IN THE WORLD!"

If you're wondering what type of event would bring the Dramatic Duo (Kanye West & Kim Kardashian) in contact with Amy Schumer, your wondering units are in correct working order.

Not many events would feature the three and it's probably even more interesting that it was Time's 100 Most Influential People that brought everyone together.

Schumer decided to make the most out of it. 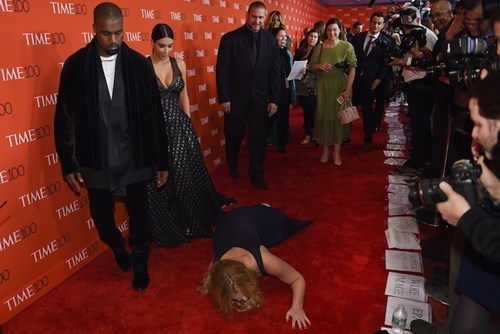 The 10 Best (and Weirdest) of Time's 100 Most Influential List

This morning, Time released its annual list of the 100 most influential people. 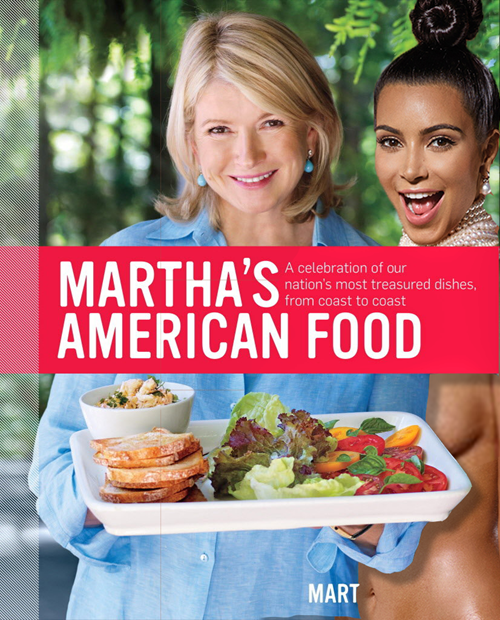 Today in Kanye: A Convict is Sueing to Keep the Kanye and Kim Out of Florida 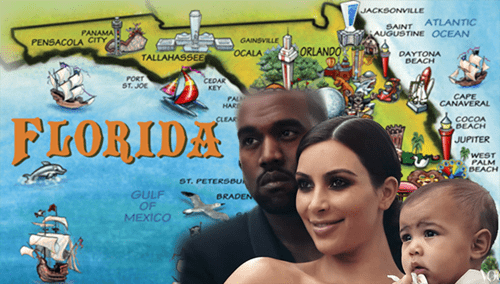 TMZ reported April 8 that an inmate has taken a case to court to keep Florida rid of Kanye West and Kim Kardashian.

"Wayne Albright -- who's been locked up since 2000 for attempted sexual assault -- claims Florida needs protection from the couple he calls 'Meat Whistles' and 'Moose Knuckles.'

Albright shows abject contempt for the famous duo, declaring the only tolerable Kardashian is Rob, who's 'eating himself out of house and home, no doubt from the shame he feels as a result of what Kim has done to the Kardashian name.'"

Albright seeks a temporary restraining order against the family, protecting the fragile coastal ecosystem from the terrible disruption Kayne can cause.

He wants to "ban these two Moose Knuckles from appearing on any television programs aired in the state of Florida, unless it's Court TV and they're on trial for posing as a famous couple."

Speaking to the judge, Albright said, "You have your work cut out for you ... so what do you say? Make us all proud."

In case you weren't aware that Kim Kardashian and Kanye West are a couple and routinely over share that fact, Kanye unleashed another barrage of barely SFW pictures Monday on Twitter.

In a string of tweets a few minutes apart, Kanye reminded us that, yes, they are still together and, yes, Kim likes to get naked for pictures. 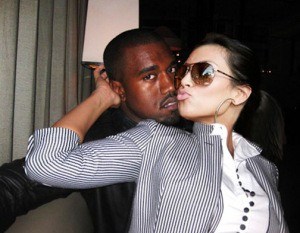 Choosing Beggar Asks For Classmate's Notes, Gets Rejected, Has Meltdown

Keeping Sadness At Bay With Another Purrfect Caturday