Hook Up of the Day: Girl Matches with That Dude Who Upped the Price on the Life-Saving AIDS Drug by 5000 Percent 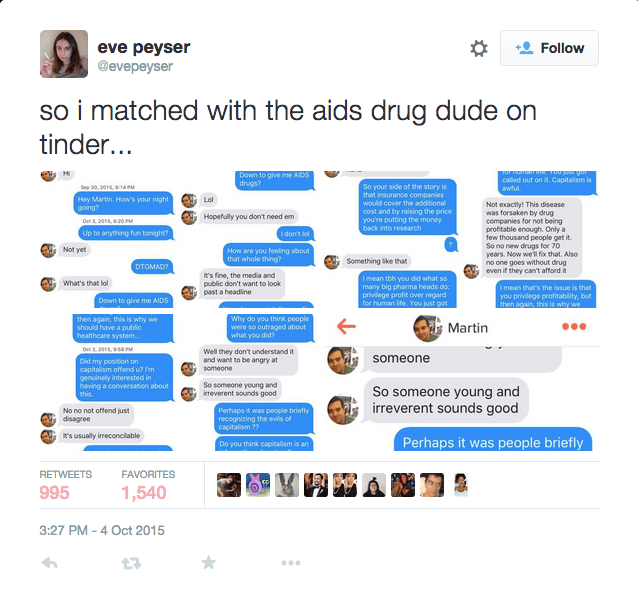 For the love of god, swipe left.

Remember Martin Shkreli? You know that guy who bought the cheap, life-saving AIDS drug and then raised the price by 5000 percent?

Well, just like everyone you know, he's on Tinder and Eve Peyser matched with him. She recognized him and wanted to start a frank conversation about his business practices.

It went about as well as you'd expect. If only dating on Tinder was as exhilarating as Kelly makes it sound!

Hilary Duff is Also on Tinder 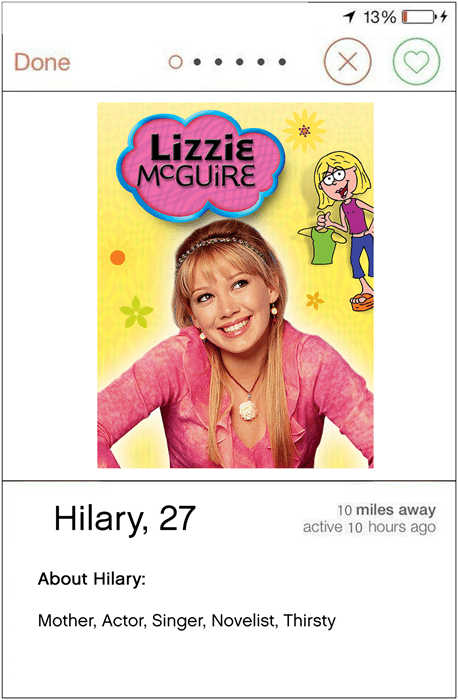 Only a day after we learned that Leonardo DiCaprio trolls Tinder for tail it turns out he's not alone in the celebrity cyber-dating world.

TMZ reports that Hilary Duff is also on the e-prowl with Tinder:

Hilary dropped her dating bombshell Tuesday morning with "Valentine in the Morning" on 104.3 FM in L.A. -- and opened up about what she's looking for on Tinder. Hint: shirtless muscle heads need not apply. Sounds like Duff is kinda hooked on the app ... saying it's the first time in her life she's getting a chance to hook up with a "total normie." It also sounds like she's totally over her estranged hubby, Mike Comrie.

Which celebrity is next? Steve Buschemi? Martha Stewart? The dog from the Air Bud movies? 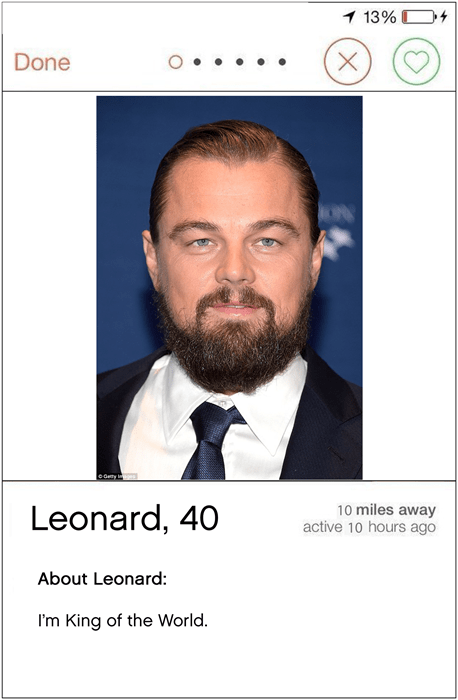 See, celebrities are just like you! They also have a tough time meeting people and are bad at social stuff.

Celebitchy is reporting that the 40-year-old star has taken to his phone to find lusty local and perhaps love.

"So, Leo hasn't had an official girlfriend since Toni Garrn. He and Toni broke up – he dumped her – last fall, after which Toni sort of lost her mind for a month and she was stalking him all over Miami. But I think she's over it now. Several weeks ago, there was a rumor that he's been "getting very close" to another blonde model named Kelly Rohrbach, but Kelly hasn't become his official girlfriend yet. So would it shock you to learn that Leo is trying out Tinder?"

He looks so sad these days with that beard. Even his man-bun has trouble reminding us of the magic that once set Kate Winslet afloat in the cold waters of the northern Atlantic.

But to those who still think Gatsby is pretty great — feel free to swipe right.

Jimmy Kimmel needed some help to cover the recent rage in online dating, so he called in Jamie Foxx to put profiles to music.

Foxx is something of a talk show mainstay for singing stuff. Here's him turning unsexy words sexy on Jimmy Fallon last year:

If Westeros Had Tinder 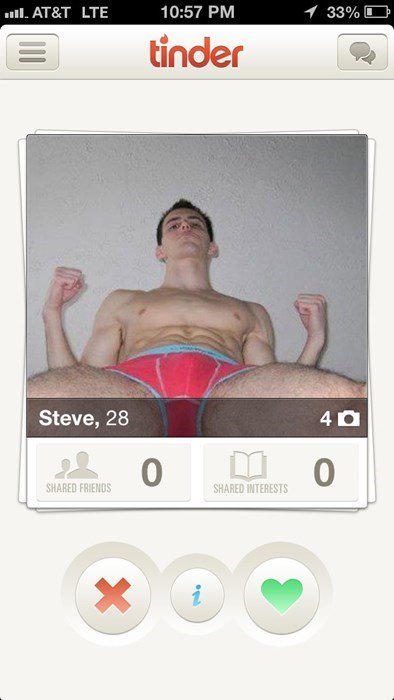