Jimmy Fallon returned to The Tonight Show July 13 after an an unexpected tape canceling June 26.

At the time, the only news that gave any cause to the cancellation was that Fallon had suffered a 'hand injury'. It turns out the real story was a little more gruesome.

He told the whole of it on last night's program, making it a funny story of tripping on a rug and catching his wedding ring on a table. Then, he said that what he suffered was called a 'ring aulsion' and he said, "Don't Google it."

So, we Googled it.

Essentially, his wedding ring caught on something and ripped the skin and muscle off the bone.

That's why you don't want to Google it.

In the video, Fallon said he was in the ICU for 10 days and it took a very delicate 6 hour surgery to reattach his finger so it wouldn't have to be straight up amputated.

But everything went well, and we're glad to hear it. Fallon's made a solid go on The Tonight Show and provided many hours of entertainment, which he comments on very sentimentally in the video.

Glad you're back, Jimmy. Now keep bringing us terribly weird gems like this.

But really, It's like, why even get married if that could happen, right?

You Leave My Mom Alone, Hamm! 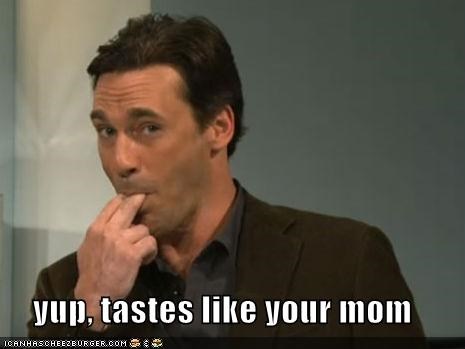