It's good to shake things up especially on the tail end of a long press tour for your enormous movie that will bring the dinosaurs back to summer.

So Chris Pratt took James Corden up on his offer to run in high heels.

He kills it, of course.
Pop Culture
Favorite

As proof that she can cry on demand, Bryce Dallas Howard (not Jessica Chastain) said Conan O'brien can talk about anything.

So he picks one of the most important and emotional subjects of all.

She was just there to promote the opening of Jurassic World, but left with so much more.
Advertisement
Pop Culture
Favorite

This week, a fan-made video brought back to light the confusion of whether Bryce Dallas Howard and Jessica Chastain are really separate people or just one entity with slightly different interchangeable faces.

The two actors, one was Oscar-nominated for Zero Dark Thirty and one won an MTV Movie Award for Best Fight Scene in The Twilight Saga:Eclipse, took to social media to put a final end to this eternal question. 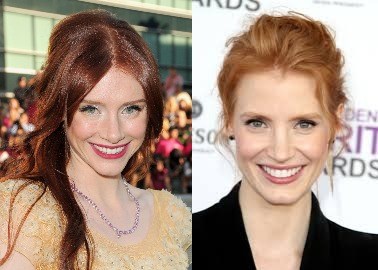 30 Work Memes For Any Underappreciated Employee