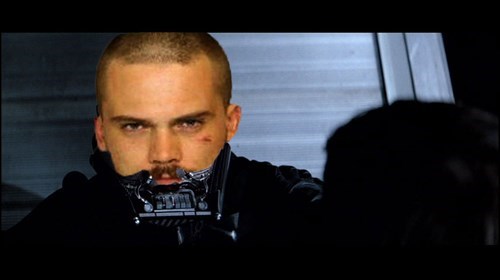 The police force is strong on this one.

Jake Lloyd, who portrayed young Anakin Skywalker in the first (and most often maligned) Star Wars prequel The Phantom Menace, was arrested last week after a car chase that took him and his pursuers over 117 miles per hour through South Carolina. TMZ broke the story:

It started in Charleston, S.C. when cops noticed Lloyd driving a Nissan at around 80 MPH. They began to chase him, and Lloyd's reaction was to speed up, weaving and narrowly missing cars and trucks. He even used the median to pass vehicles.

Lloyd hit several trees and was taken into custody and charged with reckless driving, failure to stop, resisting arrest and driving without a license.

Check out his mug shot:

Maybe the attorney should plead that George Lucas traumatically damaging Lloyd's (and most others') childhood, leading him to a life of recklessness.

Or maybe the dark side was just far too compelling.